Previously, Fault Tolerance was a unused feature due to the fact that until vSphere 6, FT only supported a single virtual CPU. Most modern applications require more than one CPU. Frequently, people were disappointed when they tried to use FT on vCenter only to find that vCenter required a minimum of two vCPUs. Thus, they were unable to use FT. This caused FT to be a unique use case and rarely used due to its limitations in terms of meager resource maximums.

With vSphere 6, this has all changed; FT VM now Supports upto 4 vCPUs and 64 GB of RAM (Which was 1 vCPu and 64 GB RAM in vSphere 5.5) The additional vCPU capacity means that you can achieve cluster-like uptime without the complexity and expense of clustering software and the associated management.

FT has been renamed “SMP-FT” to reflect the fact that it is now multi vCPU. In real terms, this opens up a whole new world of possibilities to use FT in the real business world. It is also extremely easy to use compared to classic clustering.

There are still some restrictions on the number of FT VMs you can have, you can have a maximum of 4 FT protected VMs or 8 FT protected vCPUs per host, whichever limit is reached first. The maximums include primary and secondary VMs. A 10Gb dedicated Nic is a requirement for SMP-FT, but you may be able to share bandwidth using NIOC with FT given priority. You cannot use hot-add for RAM or CPU with FT in vSphere 6.0.

With SMP-FT, two complete VMs are created. The secondary VM is a completely separate VM including storage for the first time and can now be on a different datastore from the primary.

This means FT can protect a VM against a host failure but also a datastore issue/failure as well with zero downtime. As a separate secondary VM is spun up, it will use additional I/O. You still need shared storage for the tiebreaker file but the .VMX and .VMDK files don’t even have to be on shared storage, they could be local disks. In previous vSphere versions you had to create your FT VMs with Eager Zero Thick disks, now with vSphere 6.0, all disk types are supported. Para Virtualisation Devices are also now supported.

vMotion is also supported for both primary and secondary VMs. DRS initial placement will choose where the VMs get placed on power on but DRS won’t balance FT VMs but can balance other non-FT VMs around. HA is FT aware and will take over functionality on the secondary if the primary host fails. If either the primary or secondary host fails, FT will automatically start creating another secondary VM. During a host reboot, a new secondary will be created automatically and started on another host.

SMP-FT has made some improvement to backup such as VADP support and snapshots which weren’t available in 5.5.

There is a performance penalty of SMP-FT to the guest depending on workload, VMware say this could be between 10%-30%, Host CPU impact is minimal 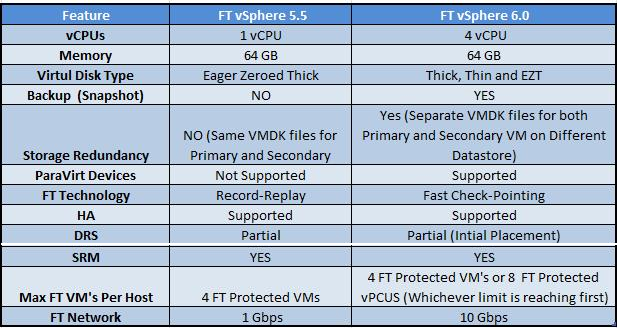